This is the “other” printer’s primary that has not gotten a whole lot of “press” in the metaphysical community.  It always amazes me, the narrow band of wavelength where light is visible to us. We are creatures of limited vision, literally. Answers.com has a lovely work-up on magenta, at least the mechanics of how one gets the color and it’s development as a usable dye in the 1890’s.

Magenta is a purplish red color evoked by lights with less power in yellowish-green wavelengths than in blue and red wavelengths (complements of magenta have wavelength 500–530 nm).[1] In light experiments, magenta can be produced by removing the lime-green wavelengths from white light. It is an extra-spectral color, meaning it cannot be generated by a single wavelength of light, being a mixture of red and blue wavelengths. The name magenta comes from the dye magenta, commonly called fuchsine, discovered shortly after the 1859 Battle of Magenta near Magenta, Italy.

In the Munsell color system, magenta is called red-purple. In the CMYK color model used in printing, it is one of the primary colors of ink. In the RGB color model, the secondary color created by mixing the red and blue primaries is called magenta or fuchsia, though this color differs in hue from printer’s magenta.

My own thoughts about this color would have been that it was appropriate to assign it to the feet, as our path is governed by the way our mind guides our life force. A fancy way of saying that our 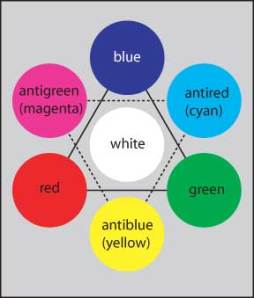 feet go where our mind takes them. But, magenta is high energy and at the very top of the visible light scale, so that will not work. And though I want to bring the light around in a color wheel, which I work with in my drawing and painting, I cannot find an electromagnetic color wheel. I did, however, find a quantum theory explanation of the colors cyan and magenta, which, if you can understand the scientific explanation, show why all the colors together come up with white light shining forth from a light bulb. You’d almost have to call it a “Tale of Two Quarks”, (or more).

Have I gotten you completely lost yet? I’m kind of wandering around in a daze, so that wouldn’t be difficult. I love working with light and shadow, as an artist, that’s my bread and butter, but I am trying to pull things that are scientific and artistic into a spiritual explanation, maybe it’s working, maybe not. Seeing color seems not to be so simple a child could do it.

Magenta is often used in our society to express love along with red and pink, very Valentine’s Day. Since it takes two wavelengths to make magenta, perhaps it is not so silly to think of it in terms of the feet, where there are two smaller chakras, and which are “fired up”, as it were, by whatever is going on in our heads and our hearts.

As much as I love green, and cannot live without it, I love the color blue even more. Most specifically the color of lapis lazuli, or indigo, the color of the midnight sky. Yes, you may have gathered by now that I am a color addict. Where another person may want a fix of a drug like heroin, give me a good set of colored pencils and I will be quite happy for days. Many of the drawings on this blog are my “work”, I put that in quotes because it is sheer joy to draw. A pity I cannot seem to earn a living at it, as that would be truly a vocation to live with. Hm, I was just Googling the colors again, and it seems that I am extremely ordinary, blue being the all time favorite color with green following as a close second. I like that, I don’t often get to celebrate being normal like the rest of the world, that’s kind of nice!

commitment and constancy, presumably because it is indeed the color of the sky and of water, (which is colorless and reflective, and mostly reflects the sky. Blue is considered cooling, and a color that is used in Emergency rooms as it is calming. Blue is also a color associated with the intuition and the aiding of it.

The Trivia Library had some fun things to say about blue. This color is also considered to indicate depression, extremes of loneliness and sorrow. I love the blueness of the sky, there is something quite reassuring about the constancy of that sky in a world that just keeps on changing whether I want it to or not. From Wikipedia, my favorite quick source on the web;

Blue is a colour, the perception of which is evoked by light having a spectrum dominated by energy with a wavelength of roughly 440–490 nm. It is considered one of the additive primary colours. On the HSV Colour Wheel, the complement of blue is yellow; that is, a colour corresponding to an equal mixture of red and green light. On a colour wheel based on traditional colour theory (RYB), the complementary colour to blue is considered to be orange (based on the Munsell colour wheel).[2] The English language commonly uses “blue” to refer to any colour from navy blue to cyan. The word itself is derived from the Old French word bleu. 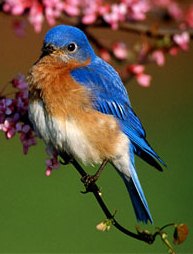 The bluebird as a totem is about inner, true happiness, and the mindfulness that brings that awareness. Since blue is attuned to the throat chakra, it is about speaking truth for happiness to awaken in it’s carrier. The bluebird totem is also a reminder to be open to creatively expressing yourself, whether through singing, (bluebirds are songbirds, after all), painting or writing.